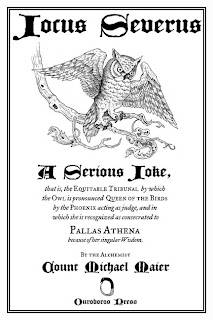 My illustrations will be appearing in the forthcoming translation of the 17th century alchemical book, Jocus Severus, to be published by Ouroboros Press.

The press release from the publisher states:

"Jocus Severus was originally published in 1617 by Count Michael Maier and is here rendered into the English tongue from the Latin text by the remarkably able translator Darius Klein. Like his work on Giordano Bruno's Cantus Circaeus, this is the First English Translation. In addition to the new translation, the Ouroboros Press edition of Jocus Severus distinguishes itself by employing new emblematic illustration work by Benjamin A. Vierling, who in keeping with our publishing style has produced fine illustrative ornaments and a fold-out plate depicting the aviary creatures of the text. These graphic elements complement the typographical details with an effect befitting a piece of fine Renaissance book art." 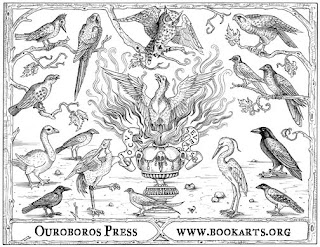 The book is to be released in September of 2010, and will be available in three unique editions, including a deluxe Athenian Wisdom edition, featuring full vellum binding, marbled endpapers, and gilt lettering. Reservations for pre-order are on a first come first serve basis, and can be made directly at Ouroboros.