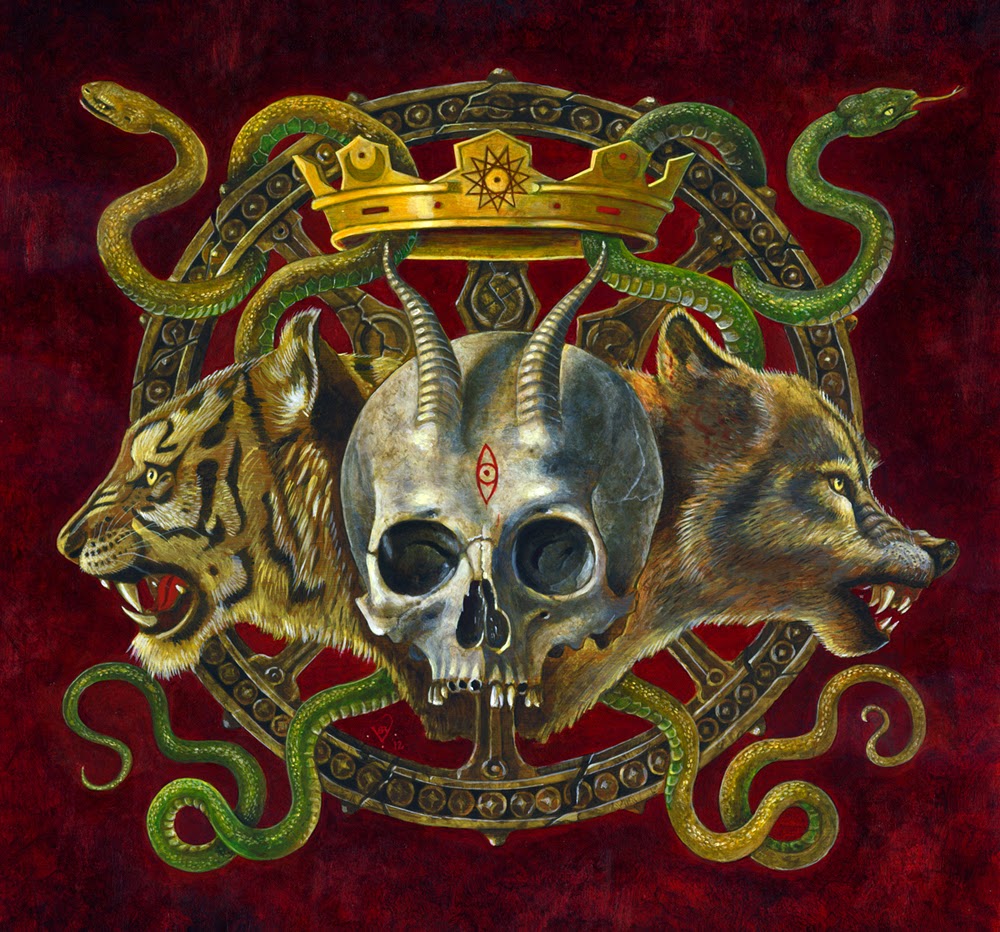 The original Embers & Revelations painting will appear in The Grotesque: International Art Exhibition, at Modern Eden Gallery in San Francisco.

Modern Eden Gallery is pleased to announce The Grotesque, a group exhibition in the style of grotesques in which natural forms and monstrous figures are intertwined in bizarre or fanciful combinations.  The grotesque has a long legacy in the chronicles of art history. The philosophical ideas of Plato and Plotinus on horror versus beauty in the classical era inspired a resurgence in grotesque drawing and painting during the Renaissance.

Directly influenced by Dante’s Inferno and his particular vision of hell, many artists began considering the verso of surface level beauty. By measuring the depths of ugliness and horror through painting, artists of all ages like Leonardo da Vinci, Gustave Dore, Francisco Goya, Hieronymus Bosch, Edvard Munch, Otto Dix and more have discovered that the strength of the grotesque art form lies in it’s ability to measure beauty.  (Modern Eden press release)

The Embers & Revelations artwork originally featured on an album cover for the canadian band, Weapon, for their 2012 release on Relapse Records.

In the background is the ‘Kalachakra’. Fate's wheel. Ever revolving, ever turning, and in the process, succumbing to entropy and decay. The apex predators flank the Kalachakra as guardians, adversaries, and heraldic totems. The horned schädel may be regarded as an evocation, a trophy, and a memorial all at once. It indicates the rudimentary structure of man as both beast and conscious vessel, the red eye of extraordinary perception being emblazoned on the Ajna chakra – seeing beyond seeing. The crown is an allusion to the song, ‘Shahenshah’ – the King of all Kings. The snakes insinuate divine gnosis through venomous initiation. Their tenacious coils evoke the grip of Noghogg, the serpent from nordic myth who gnaws as the foundation of the world. (Vierling. HH interview) 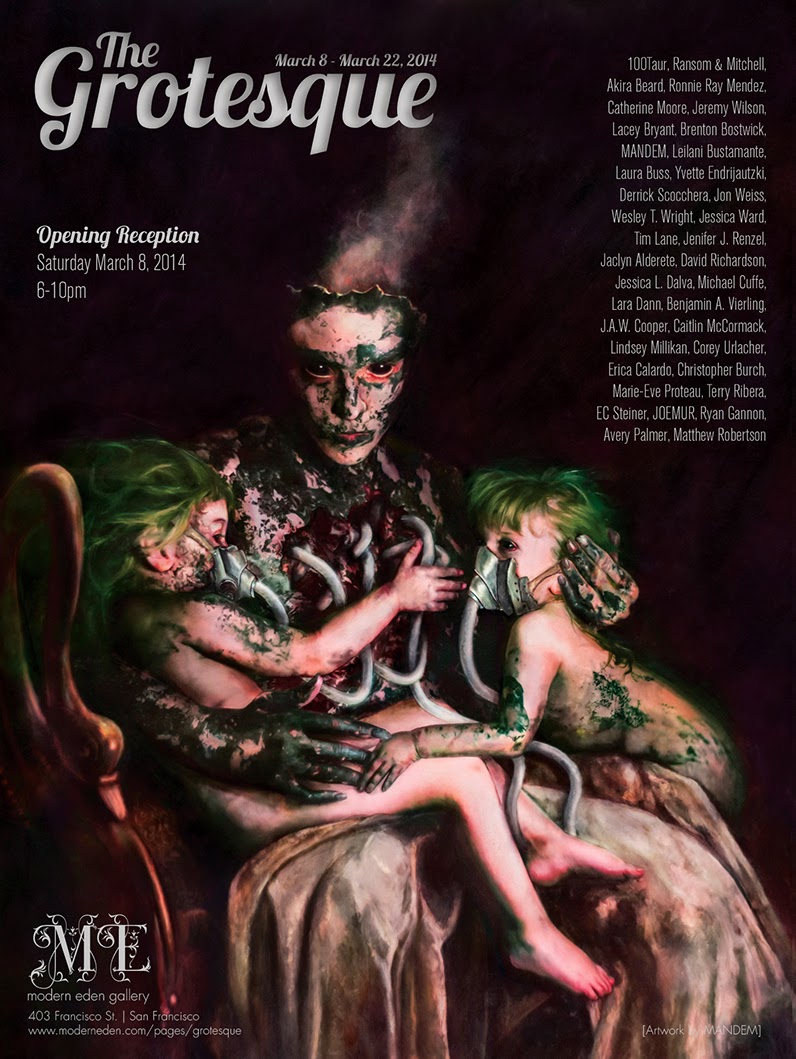 The opening reception will be held at Modern Eden Gallery on Saturday, March 8th from 6-10pm. Select featured group show artists will be in attendance at the reception. The exhibition will be on display through March 22, 2014 and is free and open to the public. 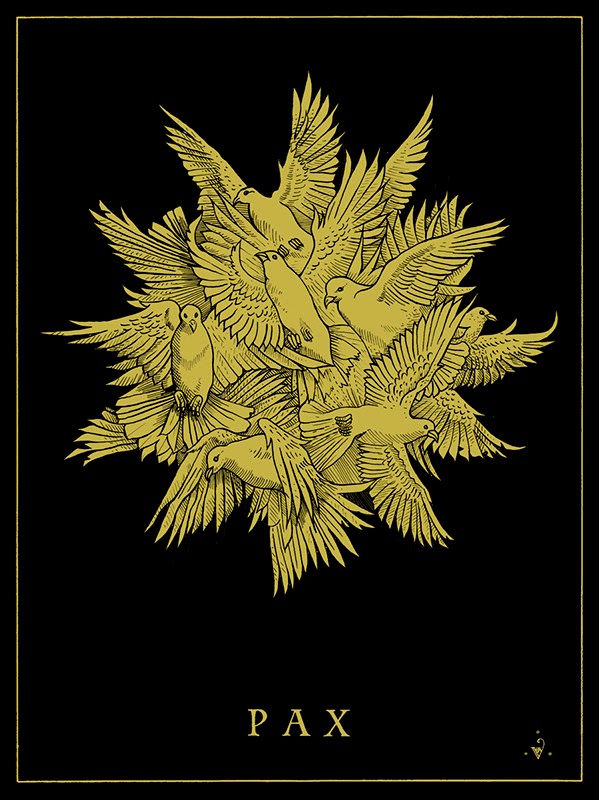 PAX is a fine art, 2 color, silkscreened print measuring 18 x 24 inches, available in an edition of 50 on Natural White, and an edition of 50 on Epic Black.  Screened at the renowned Monolith Press in Alameda, California, on Classic Crest 100 lb paper. All prints are signed and numbered by the artist. Available via mail order to all national and international destinations via Samaritan Press.

Inspired by the complex patterns of birds in flight, the starburst of doves evokes both radiance and harmony. PAX. Peace under sovereignty, A herald for the winter solstice, when the longest night kindles the divine spark of potential to come.
~
The image was originally created as an alum cover for the German band, Fyrnask, as the cover of their recent Eldir Nótt release. The album art was nominated for the Best Art Vinyl 2013 prize in the United Kingdom, and selected amongst Redefine Magazine's best album covers of the year.
~ 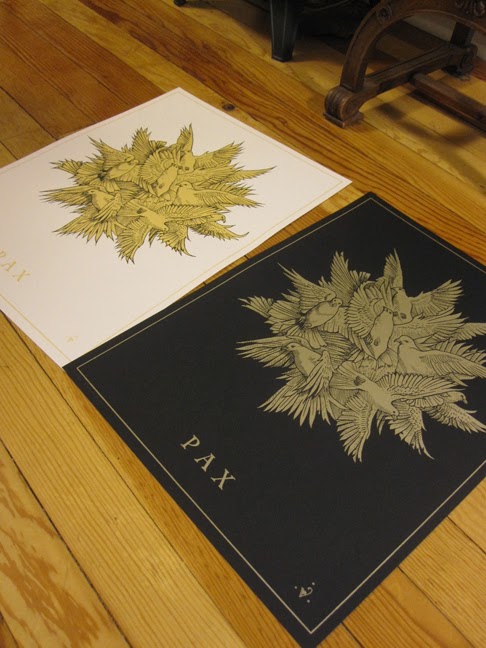