The advent of autumn sees the release of two limited edition, silk-screened Posters. 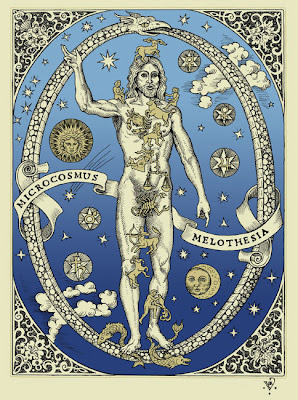 Microcosmus Melothesia is a fine art poster produced by Ouroborus Press. Produced from an original ink illustration, the print measures 18 X 24 inches,  and is screenprinted in three colors on cream paper, illuminated with rich gold, scribal black, and a firmament of gradient blues.

'The Homo Signorum, or Man of Signs, is a curious figure which appears in medieval astrological manuscripts.  Known as the Melothesic Man or Moon’s Man in astrological medicine, it shows the signs of the zodiac on the specific parts of the body over which tradition has given them rulership. The Vierling melothesia demonstrates the hermetic ‘as above, so below’ motif wherein the microcosm has correspondence with the macrocosm. The emblem further reflects this with the serpent biting its tail, bringing to mind the ouroboros in the Codex Marcianus, which is accompanied by the Greek phrase EN TO PAN, or ALL in ALL'.

Limited to 72 hand-numbered copies. The print can be purchased directly from Ouroboros Press. 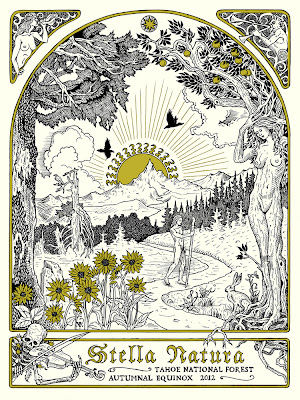 Also available is the remaining stock of the official, Stella Natura: The Light of Ancestral Fires 2012 poster. The work commemorates the music festival sponsored by the Pesanta Urfolk record label which took place on the Autumn Equinox, 2012.

All posters are two color printing, numbered and signed, edition 100 on ivory paper. Printed by Mauz at Monolith Press, in Alameda,  California. The edition of 50 on sage paper is sold out.