The Portrait of Joanna Newsom was publicly displayed at the Gage Academy in Seattle for Vierling's 2014 Decennary Retrospective exhibition, and again through the 2015 New Year at Kitkitdizzi in Nevada City, before it's inclusion in the permanent collection of Andy Samberg and Joanna Newsom. 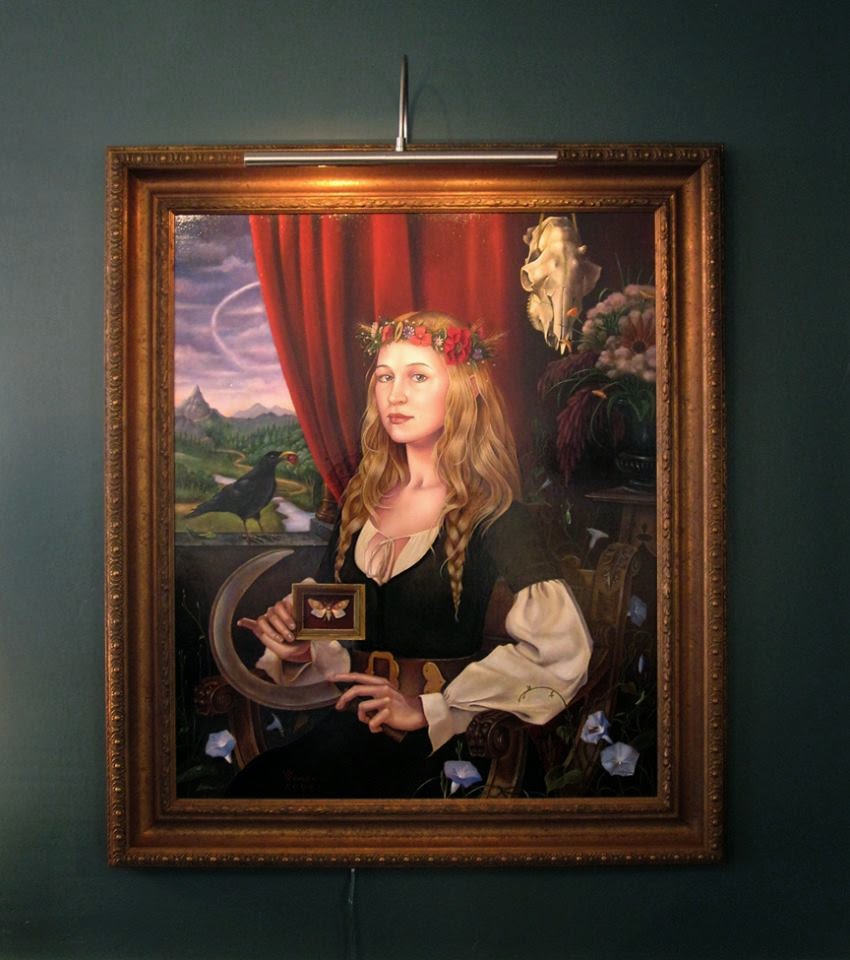 The painting was used to adorn the cover of Joanna Newsom's critically acclaimed studio album, Ys, released by Drag City in 2006. In recent years, the album has been featured on several music publications' lists of the greatest albums of the 2000s (decade) as well as all-time.

The portrait was composed directly from life, and required a year of studio labor to bring to completion. Incorporating symbols and allegories relevant to the lyrical content of the album, the painting presents a uniquely contemporary subject in a timelessly mythical context. Newsom is depicted as she actually appeared in Vierling's atelier, the inclusion of various props and enchanted objects being the result of an inspired collaboration between the artist and the model.

Rendered in egg tempera and oil pigments on panel, the work was created through use of technique dating back to the early renaissance, in which meticulously applied glazes are applied to a monochrome tempera underpainting, a method used by Hans Holbein, Albrecht Dürer, and Leonardo da Vinci. Many of the paints were mixed by hand using only the highest quality materials, which begins with a single egg.

The portrait has been hailed as a masterwork of contemporary painting, and has been featured in Marie Claire Magazine, Arthur Magazine, The New Yorker, and several printed publication, including Contemporary Album Design, and Beyond & Before: Progressive Rock since the 1960s. The painting will also feature in an academic work about Moths, to be published later this year by Chicago University Press.

Author Erik Davis, journalist and author of 'Techgnosis' said about the painting in his Arthur Magazine article "A great Album requires a great cover, and Benjamin Vierling’s painting—which looks like a Dürer by way of Millais, but more pop-surrealist—is pretty great. Luminescent, esoteric, and vividly detailed, it mirrors Newsom’s moodier new material Like the music on Ys. …..  Vierling’s rendering brings together an expressive, spiritual exuberance with an almost clinical execution of detail and technique."
Posted by B.A.Vierling at 3:41 PM